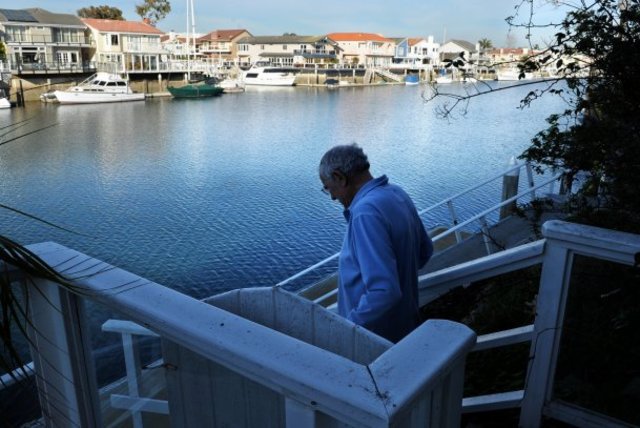 Posted: March 24, 2012 By Gretchen Wenner of the Ventura County Star

One of Oxnard’s premier neighborhoods, where boats nose up to million-dollar homes and the ocean beckons just beyond the harbor, has a problem borne of its marine environment: Sea walls are getting old.

The reinforced concrete walls that protect Mandalay Bay’s 743 homes were built in the late 1960s and early 1970s. They had a projected life span of roughly 40 years — time that’s about up.

A group of homeowners is advocating pre-emptive repairs that would cost a fraction of the estimated $118 million needed for total replacement. A recent evaluation found some stretches are at risk of catastrophic failure, but targeted resurfacing could keep the structures standing 25 more years or so.

The challenge is determining who pays for the repairs, expected to cost millions of dollars.

Bill Scarpino, a resident and member of the Channel Islands Waterfront Homeowners Association, thinks the city owns the sea walls and is responsible for maintenance, just as it is for a public street. He has a folder stuffed 4 inches thick with old city resolutions and court rulings that he says prove it.

But Scarpino’s group, a sea wall committee that has been working on the issue for about six years, isn’t asking Oxnard to pay for everything. Rather, it’s proposing to split costs 50-50 between the city and homeowners.

There are a few catches. First the city must sign on. Officials aren’t yet convinced they’re responsible for the sea walls. They seem amenable to considering splitting the cost, but the City Council hasn’t weighed in officially.

Then there’s the task of pitching the plan to Mandalay Bay residents, who would have to approve a new assessment district to fund their share. Some homeowners might balk if they think the city is solely responsible, Scarpino said, or if they think sea walls in front of their homes are fine.

“Our job is to sell it to our people as the logical solution to a problem we all have,” Scarpino said.

The other option — letting the city handle the matter — could mean repairs get postponed until parts of the walls fail, he fears. That would cost more in the end and probably heavily damage some homes and lots.

As talks drag on, the clock is ticking as the walls naturally deteriorate.

The seawalls protect the integrity of the channels, Scarpino said. Should portions fail — and such failures have occurred in the past — some soil can fall into the water, but fixes can be made before homes are damaged. There wouldn’t, however, be a Hollywood-style scenario of houses falling into the sea, he said.

Rob Roshanian, the city’s interim public works director, said staff members are looking into who is responsible for the sea walls.

“That issue has not been cleared up,” he said, but added that pre-emptive maintenance always is a good idea.

There have been disagreements about sea wall ownership for more than 20 years, according to city reports.

Mayor Tom Holden said he’s unaware of any documents that lay out who owns the structures.

“There are no agreements — at least, none that I know of,” Holden said.

But as discussions have evolved, Holden said, the city and homeowners have shaped an option fair to both.

Oxnard Councilman Tim Flynn, who with Holden has worked closely with the sea wall committee, knows some residents waiting for pothole fixes on their neighborhood streets will wonder how the expense could be justified. Oxnard already is about $100 million short of what’s needed to fix its streets and alleys, he said.

“It does place a hardship on the city,” he said of adding sea wall costs to the tab.

He wishes terms had been clearer with Mandalay Bay’s original developers. But the deal was done in an era when the city saw the dockside community as “an incredible boon” for Oxnard, he said, and, “That particular detail was not really worried about.”

A recent evaluation found the sea walls are in better shape than previously thought. Steel reinforcement in the concrete is intact, though a few wall segments are on the verge of failure. The steel could rapidly corrode if seawater makes it through deteriorated concrete.

TranSystems Corp., which did the initial survey using echo and radar equipment, among other techniques, will soon launch a second phase to better pinpoint trouble spots and come up with a repair plan. The city has paid half of the $642,568 bill for the evaluations.

How much homeowners and the city would have to pay for repairs is unknown.

“The next phase will tell us the story as far as what this is going to cost,” Scarpino said.

The work could stretch out over 15 or 20 years, with the worst areas fixed first.

Mandalay Bay homeowners pay about $500 to $1,000 a year, depending on frontage footage, into an assessment district that covers dredging and other channel maintenance. A second such district would have to be formed, through a vote of property owners, to pay for sea wall repairs. The entire process — the repair plan, the city’s approval, the new assessment district and awarding a contract for the project — could take two years before work might begin, Scarpino said.

The marina homes command some of Oxnard’s top prices. Mandalay Bay’s mix of town homes and houses sell for $600,000 to $2.5 million, said Arlene Beckwith, a RE/MAX Gold Coast agent in Oxnard who lives in the neighborhood and specializes in selling dockside dwellings.

At Westport and Seabridge, both less than 10 years old, homeowners pay for seawall maintenance, Roshanian said.

Bill Clark, president of the Channel Islands Waterfront Homeowners Association, said the community is important to all of Ventura County.On weekends, visitors paddle through the channels on rented kayaks. On holidays, they charter boats.

“This is one of the jewels of the city of Oxnard,” Clark said. “It is in everyone’s interest to take care of it.”

Bob Freeland, a sea wall committee member, often goes out on the water with his wife, Janice, in Miss Chardonnay, their Duffy electric boat. A kayak and paddle boards rest on the dock at their Romany Drive home.

You can hear the surf at night. Seagulls raise a ruckus in the morning.

In this otherwise picturesque setting, Freeland — who is familiar with the mechanical underpinnings at stake, having recently retired from a 50-year career as a structural systems engineer at the California Institute of Technology — notices details most would overlook.

During low tide on a recent afternoon, he pointed out a diagonal crack in one panel that indicates it is getting twisted. The crack has grown from a few inches to several feet in recent years. As a boat slid through the channel and two kayakers paddled by, he rattled off elements at play for the exposed concrete structures framing the scene: pilasters, cantilevers, weep holes, tie-backs and support beams known as dead men.

The sea walls at first glance might appear fine to many residents, Freeland said, but homeowners and the city haven’t paid enough attention to their deteriorating condition.

“You can just go so long and look in the other direction,” he said.