Speaking up!  CIWHA homeowners in Mandalay continue to request repairs be scheduled.

You can watch the meeting under Available Archives – https://www.oxnard.org/city-council-meetings/

We wish to request an item to be added to an Agenda as soon as possible.
Please agendize and approve an amendment to the Harbor OffShore* agreement to add a work order to proceed with the Pilaster Repair Project for the repair of (50) of the worst condition pilasters.

Harbor Offshore still is under contract with the City of Oxnard and has completed this type of work in the past and was included in the plans & estimates for the next phase which was placed on hold after being funded and fully permitted and they have the special equipment to do this project.

2: Reinstate our ability to meet with NBS to finish our funding district

At the City Council meeting on April 2nd following the Capital Improvement Presentation we raised the issue that the budget numbers indicated for the Seawall Repairs in Mandalay had no basis in reality as they stated numbers for a fund that does not exist and cannot exist until formed, brought to ballot and approved by voters. We estimate this as at least 2 years from the time we resume development of a funding district.

The Feasibility Study has not yet been completed therefore estimates are best guesses – this study was paid for out of Waterways fund 121 which we have been requesting (for many years) be addressed due to inadequate funding. The CITY presented a plan of tripling the assessment in 2006 which we were agreeable to and NOTHING HAS BEEN COMPLETED.

We were working with NBS and the City for well over a year until yet another internal changing of the guard in 2017 derailed that work. As it stands our district remains grossly underfunded and new policy changes have removed us from our 20 year involvement in participating in anything to do with seawall maintenance – we need to finish this work.

Also of Note and great concern: The TranSystems contract for seawall monitoring is due to expire in June

Although our Priority at this meeting was to schedule the delayed Pilaster Repairs the Water Quality Funding is still an important item!

NOTE from CIWHA – the funding split was hotly contested at an earlier meeting regarding a need for testing and the final decision was to fund through Measure O.
The next decision to split the funding for a new contract for services was decided in a Committee meeting and though we contested the info consent agenda item – the following split this was passed:
L-7_Staff_Report

The decision to take 55% of the funds needed for this phase was decided on by a simplistic GIS calculation of area.
We do not believe this to be fair considering development agreements for Seabridge and Westport, the boat density in those developments and the access for those developments through the main channel and public benefit of the waterways in general. 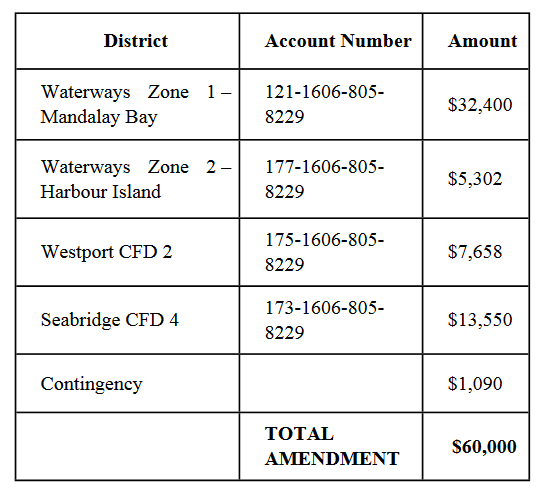